Some of you know that I lead a weekly group called Angels and Spirit Guides. Last night’s Angel’s meeting was a total blast. My intention was to use a recorded mediation about Archangels Michael & Metatron, but the person who was bringing the iPod dock for me didn’t come because we had a fierce storm roll through about an hour before the group was to start (more on that later). There I was, without an agenda for the night. I wasn’t sure anybody’d come anyhow, given the weather, but 14 people did brave the elements. So I decided we’d just chat about our experiences.

It was really helpful for the group to hear from their peers about what they’re experiencing in their efforts to connect and hear messages from guides. They shared much about what takes place when they enter into that space. That discussion then led to me channeling both Michael and Metatron (they were on the agenda, after all!).

I began by connecting with Archangel Michael first, after discussing just a little bit about him. First he came through with words of wisdom for the entire group and then answered someone’s question. Michael then directed me to return to group discussion to see how the experience was for the members listening. People shared what they felt and saw while the channeling was underway.

I then went through the same process with Archangel Metatron, allowing him to first address the group in general and then to take specific questions. What people were able to very clearly discern was the unique signatures of these two Archangels and how they each felt to them in their bodies. It was really interesting to notice the variation of experiences with the individual group members.

What a fantastic exercise in learning first-hand from the masters!

Back to the storm…I was doing sessions at the church some hours before the group, so I was there when it hit. First it rained and then down came pea-sized hail. Within minutes the sky exploded into hail that pummeled the ground from all angles. I’ve never seen anything like it. Just incredible. It was like someone turned over huge buckets of ice and shook them out at us from several different directions. The hail was golf-ball sized and rock-hard and the entire grounds were covered in white ice and fallen greenery from the trees.

What an awesome display of power…the storm, and the channelings! 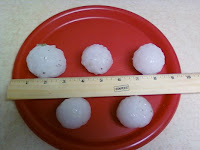